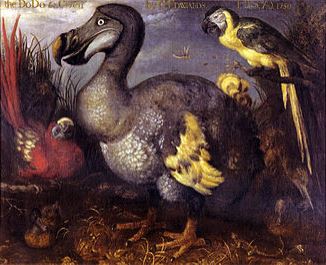 Over 190 species of birds have become extinct since 1500, and the rate of extinction seems to be increasing. The situation is exemplified by Hawaii, where 30% of all known recently extinct bird taxa originally lived. Other areas, such as Guam, have also been hit hard; Guam has lost over 60% of its native bird taxa in the last 30 years, many of them due to the introduced brown tree snake.

Currently, there are approximately 10,000 living species of birds, with an estimated 1,200 considered to be under threat of extinction.

A species is extinct when the last existing member dies. Extinction, therefore, becomes a certainty when there are no surviving individuals that can reproduce and create a new generation. A species may become functionally extinct when only a handful of individuals survive, which cannot reproduce due to poor health, age, sparse distribution over a large range, a lack of individuals of both sexes (in sexually reproducing species), or other reasons.

Our magazine list all the extinct parrots. Become a subscriber to see what parrots have become extinct.