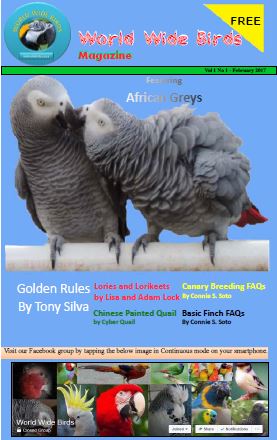 Our very first magazine edition was published in February 2017. We came a long way since then and I thought it to be a good idea to publish some of the articles in blog posts. Here is the first one by Tony Silva. Part II and III are available in the links at the bottom of the article.

On a worldwide basis, one parrot has a reputation for being an excellent mimic. No matter if one is in the Middle East or South America, Europe or the US. The first bird at the top on everyone´s list for the best “talker” is the African Grey Parrot (Psittacus erithacus). It is also the bird that is the subject of most questions that I receive via Facebook.

African grey parrots can be extolled speakers. They can reproduce speech so clearly that one is led to believe a person and not the bird is talking. I have one near the principal work area, where dishes are cleaned, food is prepared and nesting boxes are cleaned. She is a joy. She delights in calling the dogs by name, reprimanding them sometimes for no reason, and summoning them by whistling. She will call the workers or greet them. She knows precisely the language to use for each of them. She tells the other birds to be quiet. The dogs and workers are always confused.

Not a week goes by that the workers ask me “what?”. I typically look puzzled. We quickly figure out that Coco is giving them orders in my voice. The dogs are told to sit, get down or come here and they respond, believing I am giving them instructions. Nelson (a Chow Chow x German Shepard stray I picked up off the streets) often stands in front of her cage and listens to the accolades of “You´re such a good dog” or “You´re so handsome” believing it is one of us giving him accolades. Coco is a friend, a companion and a character. Her vocabulary is vast.

Not all African Grey parrots can become excellent mimics. Some never learn more than a few words, but when they do learn, there seems to be no limit. They normally only stop expanding their vocabularies because their owners stop teaching them.

As pets, African Greys are in my opinion excellent, being extremely intelligent. But they are not suited for every household. They like tranquility, dislike constant change and favor a balanced person. Mood swings, young children that pester them and very noisy households in my opinion make them nervous and unhappy. There are always exceptions, but in my opinion a quiet household is the best home for a Grey Parrot.

Three subspecies of Grey Parrots Psittacus erithacus have been named. Of these, the form princeps from the islands of Príncipe and Bioko in the Gulf of Guinea can be regarded as invalid; populations of Psittacus erithacus on mainland Africa show tremendous geographic variability in terms of size and color, making some look identical to birds from the islands. This fact makes princeps invalid. This leaves two recognizable races:

• Psittacus erithacus erithacus, the red-tailed form, has been traded over the years under various names, including Congo Grey, Ghana Grey, Cameroon Grey, Red-tailed African Grey and even Zaïre Silver Grey. The names tend to reflect the size or color of some specific populations. For example, birds from some populations in the Democratic Republic of the Congo (formerly Zaïre) are very silver, almost a whitish silver, while those from Ghana are a darker grey and smaller. Individuals from parts of Cameroon are larger than those from Ghana. The difference in weight in freshly trapped birds from these distinct populations can vary by as much as 100 grams (range 73-102 grams). Because of this great variability, aviculturists should try to pair birds of similar size, but shipments often consist of individuals from different populations and many intermediate-sized populations now exist in captivity. Careful selection of like-sized birds should be carried out when possible, though pairing birds from two populations is by no means hybridization— it involves the pairing of individuals of the same species from distinct populations.

One advantage of pairing like birds is the ability to visually sex them to some degree: males will have a greater deposit of melanin, especially in the wings, making them darker when seen from a distance; another visual sexing guide is the presence of a grey or a whitish-grey border to the red feathers that cover the underside of the tail in the female. Exemptions do occur and thus surgical or genetic sexing should always be used to confirm gender.

• Psittacus erithacus timneh, the Timneh or Maroon-tailed African Grey, is a smaller, darker bird with a horn colored tinge to the upper mandible and a maroon-colored tail. This form has always been underappreciated because of its size and color but in my opinion, they make superior pets capable of talking very well and when hand-rearing being more tolerant of busy households or strangers than the Red-tailed African Grey.

The two birds are here regarded as subspecies, though ornithologists have recently suggested they are distinct, basing this decision on morphological, vocal and genetic differences. They probably deserve to be separated, though taxonomy is beyond the scope of this article. For simplicity, when referring to them both simultaneously, I call them simply Grey Parrots.

Since Roman times, the African Grey has been the subject of interest as a pet, but it was the Portuguese sailors starting in 1419 that introduced these birds to Europe. By the 1800s and much of the 1900s the birds traded were mainly grey-eyed youngsters, which could be tamed easily; adults were viewed as being especially nervous and were to be eschewed. This concept is expounded in a booklet published in the late 1800s by W.T. Greene that discusses only Grey Parrots. (Greene wrote the early monograph on parrots, a three-volume series entitled Parrots in Captivity.) By the 1970s interest in captivity, breeding resulted in adults being the primary subject of trade. This trade has continued to date, though imports of wild birds into the US were banned in 1992 and in 2007 by the European Union. Many applauded this decision, but the CITES Secretariat (Convention on International Trade in Endangered Species of Wild Fauna and Flora) issued the following communiqué in protest of the ban:

“Geneva, 11 January 2007 – The Secretariat of the Convention on International Trade in Endangered Species of Wild Fauna and Flora (CITES) expressed its disappointment today at the announcement by the European Union of an indefinite ban on imports of wild birds.”

“The EU ban has been adopted on the grounds that it will help prevent the spread of avian flu and other diseases in human beings, but as it only concerns the import of wild birds, it risks casting the wrong impression that the international bird trade is not effectively controlled. However, this trade is carefully regulated by the 169 member countries of CITES.”

“The global trade in wild birds has declined from an estimated 7.5 million birds a year in 1975 (when CITES came into effect) to around 1.5 million today. By contrast, the global trade in live domestic poultry involves some 750 million birds a year; this trade, however, is not affected by the EU’s new health-related law as chicken and other poultry are not considered to be ‘birds’ under its terms.” “A recent analysis by Birdlife International showed that just 0.5% of the world’s bird species appear to be significantly threatened by international trade. Virtually all of these threatened species are subject to stringent controls by CITES. (The main threat to wild birds is habitat destruction and degradation.)”

“While CITES itself does impose trade bans on international trade in specimens of highly endangered species such as sea turtles and the tiger, it recognizes that bans risk creating black markets. By ending legal and tightly managed imports, the EU risks driving the market underground and making it less transparent. It also risks undermining the impoverished communities who depend on the environmentally sustainable trade in birds and removing their economic incentives for protecting bird habitat.”

In contradiction to recent claims on Facebook by an uninformed individual, CITES does NOT oppose regulated trade in wildlife.

The ban in trade in the major markets of the US and EU were regarded by many in the conservationist community as the panacea for saving the species. Sadly, as is often the case, no one took into account what was happening—and continues to take place–in the range countries. We in the west live in luxury, consuming much of the world´s resources without stopping to see what our actions are contributing to: open mines that provide minerals for computers and cellphones or gravel for roads and highrise buildings, massive forest clearance for the tropical wood used in furniture and flooring or for growing agricultural crops, the poisoning of rivers with mercury used to extract gold for jewelry for an ever more affluent world, hydroelectric projects that engulf entire ecosystems to meet the skyrocketing demand for energy, and much more….