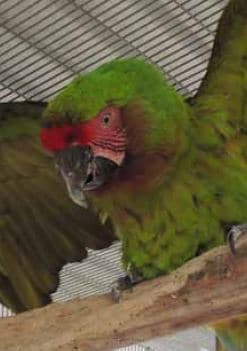 The Military Macaw
By Tony Silva

Beauty it is said is in the eyes of the beholder. A visitor, who could not understand my passion for the Military Macaws Ara militaris, recently used this saying. While I agree that the Military Macaw may not be gaudy with its predominately green plumage, it is a species that must be experienced to be appreciated, for what it lacks in bright colors it more than compensates in its personality.

The above reference was used when I showed the visitor two baby Military Macaws that I am co-parenting. The parents take care of the chicks during the night and much of the day. The rest of the time I take them to interact with them. I am doing this to understand the behavioral changes that will occur in birds that are reared simultaneously by both humans and parents. The process started as the chicks began to open their eyes when I would hold and touch them. Once they were a bit bigger I started taking them for periods each day.

They would always be returned at night. The chicks are too young to give clues as to their behavioral evolution, but they have already displayed the behavior that is typical of this macaw—a precocial personality that makes them one of my favorites: they quickly recognize their feeder, greet us with
either macaw mumbling sounds or words (in this case initially a garbled “hello” and later a clearly audible pronunciation of “hello”) and a playful, joie de vivre that is distinct to this species. Today as I was about to feed them, one laid on its back and played with a clenched foot while the other
one was pulled at my pants, paused, and then continued again.

It watched for a reaction, looking up at me and mumbling sounds. I have hand-reared all of the macaw species except one—the Lear´s nodorhynchus leari—but the Military is by far my favorite because of their cognizance. Three subspecies of Military Macaws exist. The nominate subspecies, the Military Macaw Ara militaris militaris is found across north-western South America. This form is smaller than the two subspecies and is unknown in aviculture outside of South America. In the US and Europe the
Mexican Military Macaw Ara militaris mexicanus is the common form. This race is confined to Mexico. There are old reports of its existence in Guatemala but these reports have been impugned. Finally, there is the Bolivian Military Macaw Ara militaris bolivianus. This subspecies is confined to Bolivia and northern Argentina. It has a distinctive brownish throat. This species is not common in the USA and quite rare in Europe. In India, I have seen specimens that had been bred in South Africa.

The Military Macaw is not difficult to breed in captivity. Indeed I would rate it along with the Blue and Gold Macaw Ara ararauna as a willing nester. Few however breed the species because there is little demand for the youngsters. They are deemed too unattractive by pet seekers. This is why they are frequently hybridized with other macaws. This is done to make the youngsters more colorful and therefore more coveted. This is unfortunate because in the proper surroundings these macaws make great pets that display a high level of intelligence. As an example, we have one that one day started to shout “agua, agua, agua”. It had learned to associate this Spanish word with water. It was also alerting us that the nipple that provides water was malfunctioning. We check the nipples daily when the birds are fed, but had not yet reached their cage. It was thirsty and wanted a drink. With its loud calling it alerted us of the problem. Months later, that same bird removed all of the hog rings from the door of its cage. It would sit on the door-frame and laugh, clearly mocking our inability to keep it contained.

As adults, the Military Macaw can be difficult to manage. Many owners complain that they can become unpredictable, spiteful, and unmanageable. They are clearly not for the inexperienced. I would not recommend one to someone who has only ever kept a Cockatiel Nymphicus hollandicus, but they are suitable for those with experience in keeping other macaws or amazons. I find that with proper training they are manageable and with their high level of intelligence will prove to be a wonderful pet.

This may be the “ugly duckling” of the macaws but it is a gem that is underappreciated. Perhaps if more had experience with it, they would see it in a different light.

This article is also available in the following edition:

Thank you for the feedback Paul 🙂