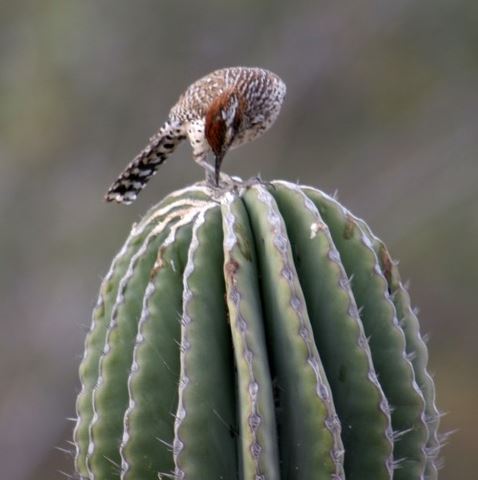 The cactus wren (Campylorhynchus brunneicapillus) is a species of wren endemic to the deserts of the southwestern United States and northern and central Mexico. Birding Los Cabos Mexico.

The Name of cactus wren in Spanish is:

Matraca del desierto, because it dwells in the desert and Matraca is a toy to make noise in the soccer football games and the call & sound of the cactus wren is similar.
(matraca toy = A ratchet, rattle or noisemaker)
Cactus wren = matraca del desierto

Its common name derives from their frequenting desert cactus plants such as the cardón ( Pachycereus pringlei), building nests, roosting, and seeking protection from predators among them. Its bulky and globular nests are constructed of plant material and lined with feathers. They do not migrate; instead, they establish and defend the territories around their nests where they live all year-round.

Are you planning a big year?
Do you want to tick these birds, as well as the cactus wren, off your Lifers List? Then look no further.
Birding Los Cabos México have you covered. Just have a look at:

Do you also operate a birding tour? We can promote you as well in our magazine and website. Just have a look at this link:

What do you get for the premier magazine subscription?
Subscribe
Login
0 Comments
Inline Feedbacks
View all comments